Can Yoga Help You Lose Weight?

How to Get Started with Aerial Yoga

How Did Aerial Yoga Get Started? 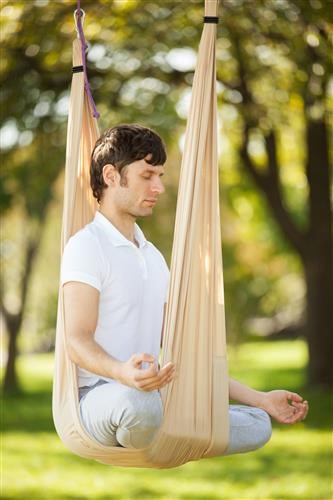 It seems like not too long ago, yoga classes were a novelty. Now, you have a wide variety of styles to choose from, including hot yoga and now aerial yoga. How long as aerial yoga been around and where did it start?

If it seems to you that aerial yoga is something that wasn’t around all that long ago, you are right. This form of practice got started in 1991 in New York. The Broadway choreographer and former gymnast Christopher Harrison pioneered the first aerial yoga workouts with a group of gymnastic athletes who wanted to continue to do aerial moves after they retired from competition. His exercises included elements of yoga, dance, aerial acrobatics, Pilates and calisthenics. Together, the group became known as Team AntiGravity.

Soon, the practice caught on with other entertainers. Aerial yoga shows became common in venues that ranged from local Renaissance Fairs to art gallery openings to TV award shows and the opening ceremonies at the Olympic Games.

Since its inception, aerial yoga’s popularity has soared. Aerial yoga is now practiced all over the world. You can take classes in this style of yoga in Vacaville, New York or Paris.

Aerial yoga, which you will also see called, anti-gravity yoga, provides some benefits and sensations that cannot be found in other forms. There are aerial moves that can fit any level of fitness. People who are just getting started can benefit from a beginners’ workshop while there is plenty of room to grow and learn more complex moves as you advance.

This is a form of yoga that works very well in tandem with practices of other areas. People who do traditional floor yoga styles will find that they flexibility and strength they gain through those styles can help them achieve the positions they will use in aerial yoga. In turn, aerial yoga removes the compression that can make it difficult to achieve the proper posture and alignment that allow you to do each pose most effectively. Many practitioners find the acquisition of this new set of skills exciting and exhilarating. They also find that they get the benefit of a total body workout that makes them stronger and more fit.

Are you ready to add something new to your practice? Our Vacaville yoga studio has aerial yoga classes, as well as many others that can fit your specific needs. Check out our calendar to pick a class today.

Permanent link to this article: https://yogacorefit.com/how-did-aerial-yoga-get-started/

We are open 30 minutes before and after each class